Listen to the History Of The Saints Podcast Now! 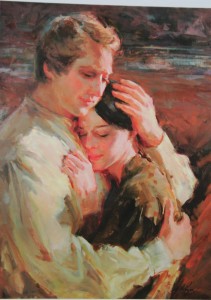 When we speak of faith and courage this story should ever be remembered. January 18, 1827, Emma Hale, 22 years-old, traveled north up the Susquehanna River from her home in Harmony, Pennsylvania to visit her sister who was living near Colesville, New York. While there Emma and Joseph Smith Jr. discussed marriage once again. They had known each other since the fall of 1825 when Joseph had lived with her family while working in the area. The two became attracted to each other, and perhaps with good reason. Joseph was taller than the average men of his day, around six feet, powerfully built, with light brown hair and clean cut features. He was frequently described as a handsome young man. Emma too was tall—about 5’9’’, well figured, with long dark hair, dark eyes and olive complexion. George A. Smith would later describe Emma as the “most beautiful woman in the universe”—a sentiment echoed by others.

Emma and Joseph courted according to the social customs of the day, things like dances, corn-huskings, letters, etc. In time they came to agree they wanted to be married. Also in accordance with social custom, though not required, Joseph asked Emma’s father, Isaac Hale, if they could be wed. Isaac’s answer was no. He did not approve and forbade it.

Consider how difficult this must have been for Emma. She and her father were particularly close. The records seem to indicate that Emma was a favorite with her father and he was especially fond of her. If she married Joseph she would be sacrificing that relationship with her father and family. There would be no cherished wedding in the family parlor with her friends and bridesmaids, and all the family gathered in celebration. Moreover, she would be giving up her home, all of her friends, the substantial dowry she had accumulated, and the comfortable, relatively affluent, lifestyle that her father had provided. In her choice, it was all that she had ever known and loved or Joseph.

And what came with Joseph? Where Emma was well-educated and cultured for the time, Joseph was a rough-hewn frontiersman, mostly illiterate, and while he was studying hard to change that, still, Emma said, he could not craft a well-worded letter. He was a hated and a hunted man. Twice already he had been arrested and put on trial, and while that represented perhaps the worst of the persecution, there were those who had threatened his life and despised him for what he believed. Joseph had seen God and Christ. An angel was his mentor and tutor, the heavens had been opened to him, and not many months hence and the Book of Mormon would be brought forth through him. Joseph was not a popular man. If Emma chose Joseph she would take his part. Whatever came upon him by the will of God and the wickedness of men would be hers as well to share.

On January 18, 1827, Emma married Joseph at the home of Zachariah Tarbell in South Bainbridge, New York. Whoever else may have been attendance that night, it was not Emma’s family.

Emma’s decision to marry Joseph represents the first real sacrifice in faith for the restored Gospel in this last dispensation. To marry Joseph was to give up everything and proclaim that he was telling the truth. On that day she took his part and carried it all the days of her life. If ever there lived a person who knew Joseph, who had suffered immeasurably because of him and what he taught, who could have exposed him if he were a fraud—that person would have been Emma, but she never did. She who knew him best bore the strongest witness that he was a true prophet.

Thank the Almighty for Sister Emma.

Can't Find What You Are Looking For?